Where did May go? How can a month disappear? When I wrote my last blog we had just arrived back in Santiago after flying in the Ghost Plane across the Pacific. I meant to write about that, and the lonely seal doing laps at the Santiago Zoo, but too quickly we returned to Canada and became immersed in life. Of which I shall write later, but first to pick up those three themes.

The runway at Hanga Roa extends across the island, so the plane cruises in from the sea, touches down, and then as it turns you see the sea on the other side. Pretty impressive, and Sally thought that a photograph from the slopes of Rana Kau might show a decent panorama of sea – runway – sea, one even that could be made even more impressive if a plane was landing at the time. As we drove up the road which climbs the side of the volcano, we heard a plane roar overhead, but it was an hour earlier than the scheduled flight, so we didn’t pay much attention. We found a good look-off spot and pulled into a layby one of the gods had made for our purpose and watched the recently landed plane taxi into the terminal. I was surprised to see that it was painted white, and had no markings, not even a call-sign number.

Naturally my imagination went into overdrive and I contemplated some secret government agency flying around the Pacific, dropping off death squads or conducting random renditions. I was musing on this when a minivan pulled up and some other tourists got out to marvel at the view. Their driver wandered over and said hello. We chatted and told him that we were waiting for the scheduled flight from Santiago to land. He looked puzzled, then said he could check the flight. He called someone and then looked back to us:

“No, that’s the only flight today. It’s the regular flight but it got here early.”

Disappointed at missing the photo opportunity, I mentioned the lack of markings and asked if he knew anything about that. He laughed.

“We call it the Ghost Plane,” he said.

Apparently Latam Air has two Dreamliners, the one which we had flown in on our way to Rapa Nui and another which had unfortunately developed a crack in one of its engines. That plane had been returned to Rolls Royce, who were in the process of fixing the problem, and who had arranged for Latam Air to borrow a plane while the repairs were being made. Sort of like when you put your car in for a service and they give you a courtesy car, a loaner, for the day. Only this is for planes. Who knew?

This explained the lack of markings, as the plane was never officially part of any fleet. And like many loaner cars, the temporary drivers didn’t give it much respect either. On the way back to Santiago I could not get my chair to recline. One of the flight attendants came over, pressed a few buttons in seemingly random order, and said “try again.” When I pressed the recline button the chair just kept going backwards, so I stopped it and spent the flight sitting comfortably upright.

The passenger in the window seat in our row did manage to get her seat to recline, and from her gentle murmurs had a very pleasant snooze as we flew back across the Pacific. As we started our descent, however, she was unable to return to the vertical. Four flight attendants pressed buttons and pulled on levers and shook the fabric of the chair, but to no avail. The poor woman was still horizontal as we landed in Santiago.

While in Santiago we decided to visit the zoo, thinking that we might see all sorts of South American wildlife that is not often seen in the north. I particularly interested in seeing jaguars, howler monkeys, and perhaps a condor. We walked a few blocks across the city and found the funicular that goes up to the highest point, San Cristobal hill. On its way up the funicular stops at the zoo, so you can get out and have a look around, and then catch a later car and go up to the top. You can’t go to the top first, because the car doesn’t stop at the zoo on the way down. So, we bought our tickets and clunked up the disconcertingly steep track to the zoo.

Which obviously is on the side of the hill and is therefore laid out as fenced areas – in effect, cages – on each side of the path, which descends – and ascends – in a series of hairpin bends. As zoos go it gives you more of a workout than most. But it is interesting to look at a group of llamas, and then a strenuous few minutes later look down on them as well. 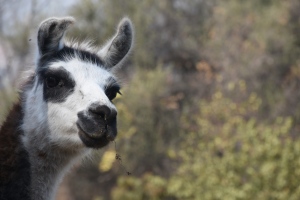 That said, I found the zoo disappointing. We must have been there in what is in effect their off-season, summer having finished and winter not yet upon them, and many of the exhibits were closed for repairs. There were more carpenters than tourists wandering about, and the sound of hammering drowned out even the macaws, which I never did find. It must be a cost-efficient way to run a zoo, to have empty cages with signs describing an animal that once was or might one day be there, but no actual animals. Those animals that were there often appeared as single specimens. I did see a jaguar, high up on a concrete plinth, and a condor pacing aimlessly before fluttering up to a perch and turning its back. There were chimpanzees and gibbons, and lions and tigers, and other ‘traditional’ zoo animals, but no tapir or howler monkeys to be found. I watched a seal swim lonely laps around a concrete rock in a concrete pool, and we decided enough was enough. 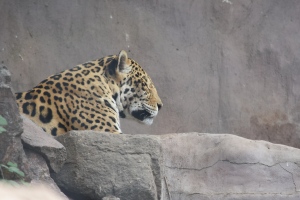 We took the funicular up to the top of the hill, where we sat on a cobblestone patio and ate a microwaved stuffed pastry, a disappointment after the empanadas of Rapa Nui, ourselves and the city watched over by a statue of the Virgin Mary, shrouded in smog.

During the rest of our time in Santiago we wandered around the city centre, eating in small restaurants and trying to absorb as much as could, including the stunningly good Museum of Pre-Columbian History. This is quite compact, and it only takes an hour or so to see all the exhibits. The range of artefacts is incredible, and I found it interesting to put the Inca and Aztec cultures into a wider socio-cultural mosaic.

I wish I knew more about the history and societies of our southern neighbours; it was noticeable that events which were commonplace to locals were so eye-catching to me. On one corner a line of people selling food, which they do in small batches from coolers and cardboard boxes; the only rule, apparently, is that the food must be home-made. The thousands of students marching down a major boulevard, shadowed by police and trailed by water cannons, the whole cavalcade concluded by a line of street sweepers picking up any discarded trash. The random kindnesses of strangers, pointing us in the right direction as we tried to match street to map.

And then it was time to return to Canada, and the month of May which has flown by. It has been a long cold spring on the Island, with daffodils and tulips only now coming into bloom. I set up some grow lights in the basement and started a variety of flowers, vegetables and herbs from seed, but it has been too cold and wet to prepare the beds for transplanting, so everything is languishing in my daughter’s greenhouse. I finished a couple of paintings that were included in an exhibition of work at a local gallery, which sounds a lot grander than it really was – basically, all of us who take classes from Henry Purdy RA were asked to submit something! That said, it’s fun to see one’s work on the wall in a public space, even if it is a bit nerve-wracking to wander around incognito and hear what people say about your efforts. I’ve spent time on campus, where I finished a book chapter and met some students and attended several meetings and started the process of cleaning out my office. There’s still a long way to go, however, but that will have to wait. As I write this, I am flying over the Rockies on my way to Vancouver. I am on my way to my last education conference, at least the last one that I shall attend as a working professor. There will be another conference in July, in the UK, but by then I shall have officially retired and be an independent scholar.

Four more marbles in the jar.

One thought on “Where Did May Go?”