Among the summer visitors this year was Gavin, a friend from Calgary. On a beautiful Saturday morning in late August, we travelled though time as we explored Prince Edward Island. After crossing the bridge from Charlottetown to Stratford, we headed east through the rolling farmland of King’s County.

At the Roma Settlement on Brudenell Point we listened to Acadian music, and watched volunteers recreate activities from the 1700s. Trapping, quill-pen writing, gardening, fish filleting … the sights and sounds of the early French heritage of PEI was everywhere. We bought a loaf of bread made from a three hundred year old recipe, something to savour once we got home.

Looping down around the coast, we passed through the town of Montague and out to Panmure Island. The beach was relatively crowded by PEI standards – there must have been 50 families in sight! We wandered along the shore line, paddling in the gentle waves, while the sun worshippers turned over to make sure they were evenly browned on both sides.

Leaving the beach we made our way down a narrow lane through the woods to the pow-wow grounds, where we had just missed the Grand Entry. We did see the Inter-Tribal dancing, and listened to the different bands singing and drumming. The crowd was growing quickly, and we enjoyed a quick snack of fry-bread as we wandered past the stalls selling a wide range of jewellery and other crafts.

The farmers were busy combining as we cut up to the north shore, taking the side roads alongside fields of corn, wheat and potatoes. At Savage Harbour we watched herons on the sandbar off the wharf, and an osprey hovering above the tidal channel. We walked down to the mouth of the river and saw a more typical PEI beach – one solitary sun shade along an otherwise deserted swathe of sand. 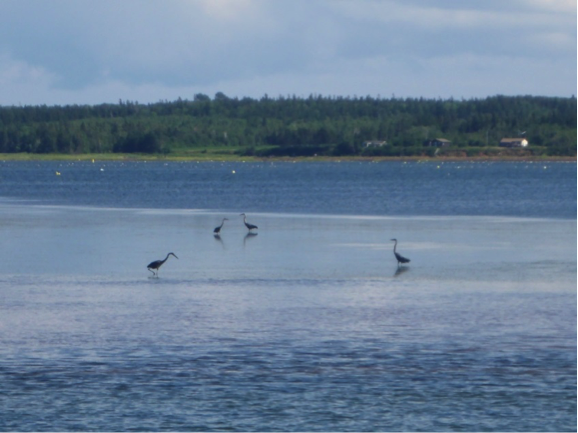 It was late afternoon now, so we cut across and down the Blooming Point road, not stopping to see how many people were on that beach, and so past grandiose Dalvay House and in to the National Park. At Covehead Bay things were pretty quiet, and we were able to grab the front table on the top deck at Richard’s, looking out over the bridge and the bay as we ate our fish and chips. As a Yorkshireman with some experience in these matters, I can say that they were among the best fish and chips I’ve ever eaten! 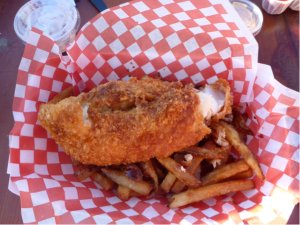 Back on the road and across country again, this time to Stanley Bridge, where we were in time to join the people lined up for the ceilidh at the Women’s Institute Hall. A full house greeted a fabulous performance by Richard Wood, Gordon Belsher and Brad Fremlin – a “world class kitchen party” indeed, from opening chords to two standing ovations and an encore. Sadly the camera battery died, so no photographs to support my claim. Strawberries and cream sold by the WI at the intermission cooled the audience down for a while, but it was a happy and chattering crowd that poured out in to the late summer evening after the show.

We drove back to Charlottetown via Hunter River, as direct a route as you’ll find anywhere on the Island. The odometer ticked over to 300 kms as we turned in to the driveway.

In one day we had experienced a lot of what PEI has to offer, from the Micmac and other First Peoples to the French settlers of the 1700s, past the old farmhouses and hamlets of the 1800s to the Celtic music, fine food and beach bunnies of the modern day. As we sat on the deck under the stars and the full moon, enjoying a wee dram to close the day, I marvelled how wonderful it is to live in such a beautiful place.