It’s been a busy few weeks and I’ve been singularly unsuccessful in my attempts to write this letter. Since I left PEI I attended a big educational research conference, had numerous other meetings, visited with family and friends, have been to “the Emerald Isle” for the first time, and am now back in Kabul. I’m tired just thinking about it. At least I’ll be in one place for the next couple of weeks, so that gives me a chance to unpack my suitcase, and then I’m travelling to Kosovo for a few days before heading home.

I don’t want this to be a travelogue, so a few snippets which stick out in my memory.

The flights to Europe were uneventful, except on take-off from Halifax when a panel fell off from above the overhead lockers. The flight attendants (cabin staff? stewards?) whisked it away before I could get my camera out, but I ignored their glares and took a photograph anyway. One just hopes the glue that holds on the wings is a bit stronger.

There was trouble in Istanbul when I was there, I know because I saw it on the BBC News. But Istanbul is a huge city, and where I went was not affected. I walked across Taksim Square, and there were buses full of police men lined up on the perimeter. The police were just there, sitting on the buses, some sleeping, some talking, many just listening to something on their headphones. A few stood outside, leaning on the railings or against the side of the bus, relaxed. A deterrent, I suppose. Some colleagues said that seeing all those police made them feel uncomfortable. Given some of the scenes we have witnessed over the past few months, I felt that I would have been more uncomfortable if they hadn’t been there.

That night there was trouble in the square, the television showed photographs of burning barricades, tear gas, advancing riot police. I remember hearing some of the banging, a distant pulsing drumming of night stick on plexi-glass shield, but the hotel was far enough away that we couldn’t smell the tear gas or the smoke from burning tyres. 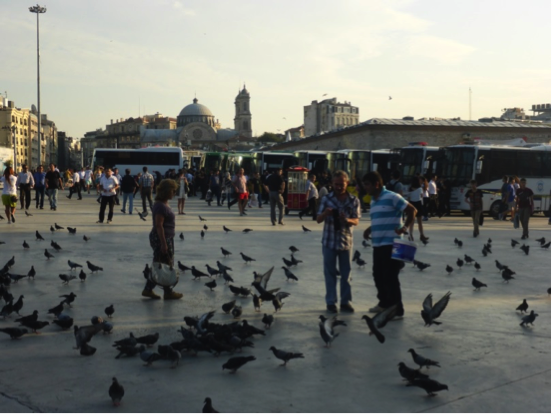 The conference was busy, and it was good to meet many colleagues I had not seen for some years. With one thing and another I’ve not attended many academic conferences recently, and it was good to get back in to the rhythm of presentations, discussions, and “enthusiastic differences of opinion”, as they say. It was also good to be reminded that one should always have someone else check ones power point slides before the session, just in case you happen to have made a little mistake.

Perhaps some people would agree?

Although there was an evening social event which provided a river tour up the Golden Horn and the Bosporus, under well lit bridges and past palaces and castles, and that weird tower they highlighted in one of the Bond films, that was about the sum of my touristing. I didn’t get to the old city at all, to the bazaar or the hammam or the Blue Mosque – perhaps next time. Next time I’ll go back as a tourist

From Turkey I travelled north, to the UK, where I managed to add two new countries to my list of countries – I’m now up to 55. I can’t believe I’ve not travelled across the Irish Sea before! First, though, I had a couple of meetings in South Wales, and managed to visit Newquay, a small town between Aberystwyth and Cardigan on the Pembrokeshire Coast. I saw the house where Dylan Thomas lived for a while, and wrote Under Milk Wood, and the pub where he drank beer with Richard Burton, and ate an ice cream (as one does at the seaside, even when it’s freezing and there’s a gale blowing), and watched the recreational boat bobbing sea. 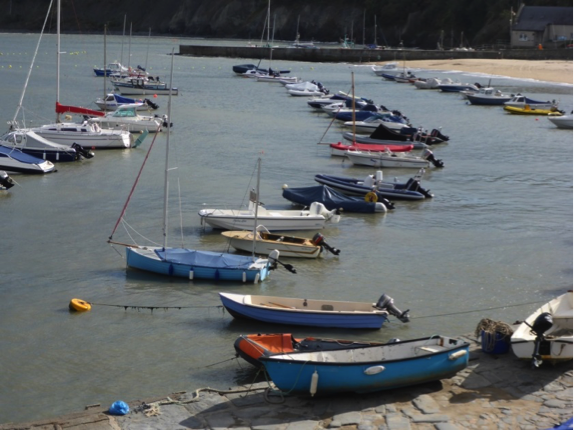 I also made a new friend. 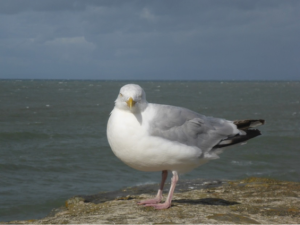 Who do you think you’re looking at?

Ludlow from the church 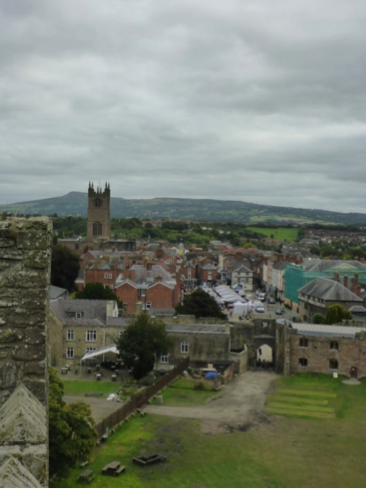 and the church from the castle

Back in Wales I collected my mum and Victoria, and after lunch at the South Stacks café we caught the ferry to Dublin. Arriving in the late afternoon, the rush hour traffic allowed us to get a good look at the center of the city, as we navigated the various roads along the banks of the Liffey. Ireland was a lot flatter than I had expected. I had anticipated rolling hills with mountains in the distance, but that wasn’t really the case. There are lots of long valleys, very flat, and highways fringed with a border of trees so you can’t really see what lies beyond the motorway. It is green, though, and it’s true, the Guinness does taste better there!

In Sligo a colleague from the university there took me to the grave of William Butler Yeats, whose mother was from the town and who lived (and wrote) in the area for many years. In the grounds of near-by Lissadell House is a natural amphitheatre, where in 2010 Leonard Cohen read Yeats’s poetry to an awestruck crowd, but it is closed at the moment due to some dispute so I couldn’t make a pilgrimage. The revered Cohen did visit the church, though, and sat in contemplation there. And so did I!

With my meeting at the university finished, we headed out of town, past private castles standing proud on wave battered headlands – oh to have enough money to buy one of those! – and on to a Neolithic burial site with the normal array of standing stones, half excavated grave passages and so forth. What was not normal was the hedgerow which bordered the site, where small twists of cloth and paper festooned the branches of the hawthorn trees, white slips against the ripe red berries. What ancient ritual was this, we wondered? Prayers to old gods, perhaps; to have children, or to not; to be healthy, or to cast spells? And why, in the 21st century, does this practice persist?

In the UK City of Culture 2013, Derry-Londonderry, we walked down through the Bogside, past the entrance to Free Derry, entranced by the murals … and amazed that I was there, in that place of black and white television images, of tear gas and baton charges, of Bloody Sunday and all the other visual touch-points of the Troubles. Victoria and I walked across the Peace Bridge, and I reflected on Kosovo and Lebanon and Afghanistan, the places where I’ve worked (and still work), those other points on the post-conflict continuum. Perhaps one day there will be peace bridges there as well.

Back to Wales and a weekend with old friends, lots of food and drink and good stories. We spent a day touring the Italianate splendour of Portmeirion, a pseudo-village carved out of the cliffs and now a magnet for tourists, designer weddings and film makers, and then wended our way through Snowdonia to the mystical village of Bedgellert and the wondrous scenery of the Llanberis Pass.

I drove Victoria to Manchester, from where she will travel to Chester to resume her walk – after a three day interlude in Florida for a wedding, sometimes I think she’s dafter than me! – and flew back to Istanbul. A few hours there, and thence to Kabul. Where it’s 29C and sunny, and the garden is full of sunflowers and roses. In October. Amazing. But more about that next time.