As I make my way home from Kabul – I’ll be back in Charlottetown on Monday – I think a more reflective piece is appropriate. Like most people so much of what I know about Afghanistan is largely based on what I see and hear in the news, whether on television or in a paper or magazine. Having now made five trips to Kabul over the past year, including a couple of short visits to two provinces, I can say that although what I hear and see in the news is true, it is not the whole truth. There is more to Afghanistan than a series of acronyms, and we should not define a country by the number of AOGs, IEDs, INGOs, ISAF, NGOs or SAF events which are reported.

As I look back over the past year, I can report that there are changes in the air. Although there are still issues of physical safety and psychological wellness, especially in some of the provinces and amongst the internally displaced groups living on the outskirts of Kabul, there are signs that people are moving up the hierarchy of needs. People are complaining about the amount of time it is taking to make road repairs, or the amount of garbage which lies uncollected on various junctions. These are good indicators that people are building their self-esteem, seeking the respect of and by others. Maslow would be pleased.

(He is proud of his work – and if you enjoy his kebabs, you can like him on Facebook!)

There is a growing sense of trust in the Afghan National Army, the ANA – the training efforts of ISAF contributing states such as Canada are starting to pay off. I have heard this from multiple sources (note to graduate students: always triangulate your research data!). I overheard expatriate American and Indian civilians talking in the airport “lounge” about the improved security situation they experienced during their most recent trips in Kandahar. I have met Canadian army officers who have commented proudly on the skills of their Afghan counterparts, although one has to take that information with a grain of salt, as it is the Canadians who are doing the training! I have talked to various Afghan nationals, the colleagues and drivers with whom we work. All agree that the ANA is a much more organized and respected group than it was before.

The same people suggest that the Police Force still needs work, something not disputed by the Mounties and other international trainers whom I have met, and the Traffic Police are almost Pythonesque caricatures of what one could do if given the power to perform miracles of traffic flow. A few days ago we were stopped at a traffic circle, along with everyone else, by a Traffic Policeman who imperiously held up one hand to keep us in place, while using the other to hold the cell phone on which he was conducting a conversation. For over ten (10!) minutes. But the ANA is reputed to be developing admirably, and that bodes well for the future.

There is physical change as well. There is a new duty free shop at the Kabul International Airport. There used to be a dingy den, selling cigarettes and tobacco, and that’s still there, hunched off to the left as you enter the departure lounge. But next to it there is now a bright and clean space with perfumes, handicrafts, leather work, chocolates, and fluently multilingual young men to help you choose.

The same old chai stand is still there, on the right, selling nuts (pistachio, almonds) by the kilo, bottles of water for $1 USD and chai sabz by the paper cup. No doubt one day I’ll come by and find it has been replaced by a food court, with a KFC (Kabul Fried Chicken) outlet and a Herat Restaurant franchise. Progress, I suppose, but there is a certain loss as well, one which I think we often take for granted in the west.

There it seems we have a continued and seldom noticed transition from old to new – the family-run general store which disappears, the appearance of a new supermarket on the corner offering greater variety and cheaper prices. The independent bookshop stacked to the ceiling with dusty tomes, where we sometimes browse but seldom buy. And then one day we walk past the new parking area, and wonder what happened to the old place.

Of course, not all change would be bad. We had some colleagues come down from the central mountains region, by road. They felt they had to come in separate cars, so as not to draw attention to themselves. In this they were following Royal protocol – don’t have all the key people in one vehicle.

At the workshop we gave them small mementoes, a cloth carrier bag containing a pen, a notebook, and copies of our presentation in English and in Dari. They were pleased to receive these, but were not sure they would get them home without being robbed. This is general banditry, not AOG (Armed Opposition Groups) action, and is a symptom of the poor state of law and order on the roads through the mountains outside Kabul.

Our colleagues from Nangahar province also came by car, along the Jalalabad Road which links Kabul to Pakistan. On this road there are regular AOG events, with IEDs, SAF (small arms fire) and sometimes, as happened a couple of weeks ago, spectacular attacks on military installations. Our colleagues had left at 0500 for a three hour drive, and were 2 hours late as they got trapped behind an ISAF convoy. This can be as scary as knowing there are bandits around – convoys make tempting targets, and their jammers mean you can’t phone anyone to tell them you’re going to be late.

But the thing is, our colleagues came. They did not send their excuses and their apologies. They literally risked their lives – for a workshop.

I asked them why. They each said more or less the same thing – that the future requires an educated population in Afghanistan. And that it is teachers who will make the difference. These are sobering thoughts indeed.

Next Friday I shall be back on PEI, so I shall take a short break from these letters. Assuming that the Mayans got it wrong, I plan to return to Kabul in the New Year, and will continue writing at that time.

With best wishes for Christmas and the New Year, and I hope you enjoy an excellent festive season with family and friends.

PS Finally, and by popular request, here is a photograph of the suitcase shop which I wrote about last week. 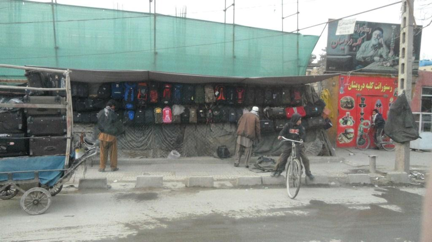 Ah that all my shopping was so easy!