So, if you’re getting this then you didn’t write and ask me to take you off my list! Here is my second letter from Afghanistan. The city is on the cusp of winter. We had snow on Wednesday, it started out with rain and then turned mid-morning in to sleet and wet flurries, but it didn’t accumulate. On the mountains around Kabul the snow line is getting lower every day, so soon the city will experience the white stuff as well. But mainly the days are clear and cool. I read somewhere that Kabul gets over 300 sunny days per year, and certainly 11 out of the past 12 have been glorious. 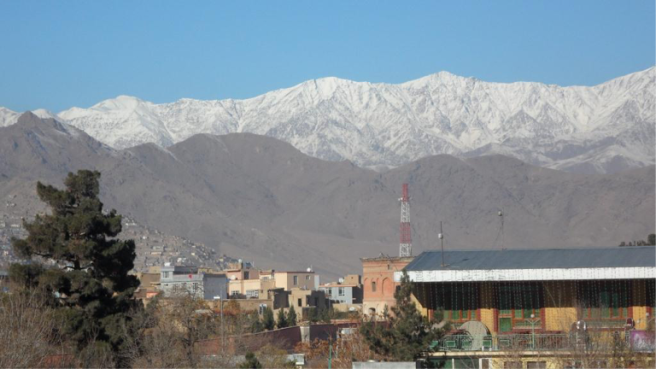 But on Wednesday the roads were miserable, the rain runs down off the hills and the storm drains are still not properly cleared. There are attempts being made to fix things up, though, and as we drove to our first meeting of the day I saw groups of municipal workers trying to unclog the drains.

I also saw what I believe to be the first working traffic lights in Kabul! Now if only they can figure out how to teach the drivers to follow the directions!

Of course, Wednesday was also the day I was going out to Camp Phoenix. This was a chance to do something I’d promised the students at the Captain Nichola Goddard School in Calgary – to visit the camp and to wear the school t-shirt when I was there. This was a bit more difficult than I had anticipated, given the weather, but I solved the problem by pulling the t-shirt on over my regular shirt and not taking off my jacket until the photographer was ready! There are three key things to notice here. First, I’m wearing two shirts, plus I’m standing next to men whose job it is to keep fit, so no sarky comments please! Second, the students in Calgary have selected the Phoenix as their school mascot, so there was a certain degree of serendipity here. And third, even more serendipitous, it turned out that the officers who most influenced Nichola’s military career were all at the Camp that day. They are over here in Afghanistan working in different roles and at different places, but on this day the General had called all his senior staff in for some sort of briefing. It was a rare honour and privilege to spend time with Colonel Chamberlain, the commanding Officer of 1 RCHA when Nichola joined the Regiment after RMC; Colonel Williams, the Commanding Officer of 1 RCHA when she was deployed to Afghanistan, and when we had her remembrance service at CFB Shilo; and Colonel Hope, who was her Commanding Officer in Afghanistan. Ubique indeed.

This past week has seen us move forward on a number of work fronts. We are trying to find a suitable house to rent, one we can convert in to an office and accommodations. The office we are using is well-equipped and serves our purposes well except for one thing – it takes over an hour (on a good day) to get from there to the Teacher Education Directorate where we do most of our work. So we have been trying to find a place more conveniently located in that part of Kabul.

I think we’ve looked at 10 or a dozen houses so far. The good news is that the rents are relatively cheap and so we will be able to afford quite a nice place, especially as we shall not have office rental and consultant accommodation costs to cover. The bad news is that Kabul is still rebuilding, and not all the places we’ve looked at are quite ready yet. 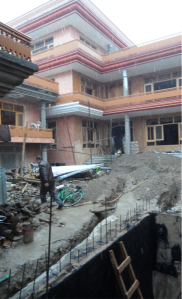 I have no idea why this one had a huge hole in the yard, and the mud didn’t add to the “curb appeal” either!

With the advent of winter people are bringing in their final harvests. Different types of transportation are used to bring the crops to market. At one house we visited there was a small shed, in which I found the biggest cauliflower I have ever seen!

Of course, not all transport is motorized, as can be seen from the next two photographs. The sight of donkey carts is quite common in the city. At our hotel, every afternoon at around 5.00 pm the “garbage donkey” comes along. The little fellow stands there patiently while bags of refuse are piled on to the cart. So far we’ve only seen him as we make our way home from the office, and it’s always been too dark for me to take a photograph. Hopefully I shall get one before I leave!

There are many person-powered carts as well, transporting goods around Kabul. These men not only pull heavy loads, they manoeuver in and out of the city traffic in ways that defy logic or common sense, and yet seem to do so with impunity. They are quite remarkable to watch, especially navigating a busy roundabout at rush hour – from our invariably stuck vehicle we watch them muscle their way along.

So this is Kabul in late November, on the cusp of winter indeed.

And yet, for all the signs that the heavy snows will soon be here to add further problems to the city streets, and the barrows of pine nuts signalling that the cold season will soon be upon us, there are still faint reminders of the summer that was, and that will come again.

In the parks and gardens there are still roses in bloom, faded a little now of course, and burned by the frosts, but a welcome sight nonetheless.

I’ll close here with two notes of congratulation. First, to our youngest daughter, Kate, who is about to complete her first semester as a law student at McGill. Congratulations, Kate – and good luck with your exams!

And second to Victoria, our second-born daughter, who tomorrow celebrates a very special birthday! Congratulations and Happy Birthday to you, Victoria, sorry I’m not there to celebrate in person but I will have an extra cup of chai sahbz in your honour tomorrow!

For everyone else, I’ll wish you Happy December, and hope the weekend is a peaceful one in your world.