There’s a complex attack going on in Kabul right now. I know because I just saw it on the BBC News. We were watching television as we ate our dinner. The cook doesn’t work today because Friday is a day of rest, so we had to fend for ourselves. Or forage, as a colleague puts it. We searched the fridge and cupboards and ended up with a veritable feast: cheese omelet, tinned sardines, fresh tomatoes, spring onions, and – of course! – a hot fresh round of naan. Luckily the guards work on Friday, so we were able to ask one to go and buy the bread.

On the news the reporter said, “I’m just hearing that there’s an ongoing major attack taking place in Kabul. Explosions at a compound housing foreigners.” We looked at each other. Then we checked our phones, for the emergency message that should have come. Nothing. “More on this breaking news later, now back to whether or not Chinese trade figures are accurate.”

Bleep. A text message. A VBIED [vehicle borne improvised explosive device, AKA car bomb] has gone off near an ISAF convoy on the Jalalabad Road.

“Breaking news. There have been explosions at a compound used by international contractors and UN personnel, it’s heavily fortified and we’re hearing news of small arms fire. Now to Brussels, where Canada and the EU have signed a free trade agreement …”

“Breaking news. Large explosions and small arms fire reported from Kabul. We are trying to connect with our reporter in the Afghan capital.”

Bleep. The road is now cleared and there is normal movement.

“Breaking news. Two bodies pulled from the rubble of the Westgate Mall in Nairobi have been identified as terrorists …”

We turned off the television, finished dinner, and brewed a pot of chai sabz.

We purposefully surf the news channels, switching between the BBC, CNN, and Al Jazeera. They all tend to follow the same stories, but from subtly different perspectives. Earlier in the week we had noticed a larger number than usual of helicopters clattering overhead, and streets were closed in an apparently random fashion in order to accommodate VIP convoys. It was only later that we learned the US Secretary of State had been for a visit.

Indeed, it’s a good job we have news organizations to keep us informed. Kabul is a huge city, and the Jalalabad Road is on the other side of town, past TV Hill, under the watchful gaze of the ‘eye in the sky’ which is always tethered above the city. 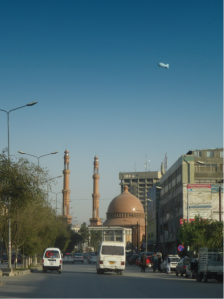 This week has been quite different, as we celebrated Eid al-Adha, which is one of the most significant days in the Muslim calendar. It’s also known as The Festival of the Sacrifice, and recognizes the time when the prophet Ibrahim was going to sacrifice his son Ismail, but Allah intervened and provided a lamb for Ibrahim to sacrifice instead. A story which readers of the Old Testament will also recall. The modern day celebration involves prayers at the mosque, and from what I heard (the loudspeaker on the minaret is about 100 metres from my window) a rather long sermon from the Imam. It also involves food. Lots of food.

The main course, of course, is a sheep. Our Afghan colleagues tell me that a good sized lamb runs about 10,000 Afs, or $200, which isn’t too bad. I think we pay about that at home – mind you, ours is cut up and frozen, not on the hoof.

I’d love to see our friends Alister and Margaret, who raise sheep for milk, doing this down University Avenue! But it’s not all about the meat! Eid al-Adha is a time when people get together, visit relatives, and over the four days of the festival a lot of dried fruits, nuts and sweet pastries are eaten. In the days before the holiday, the streets are packed with people selling goodies. 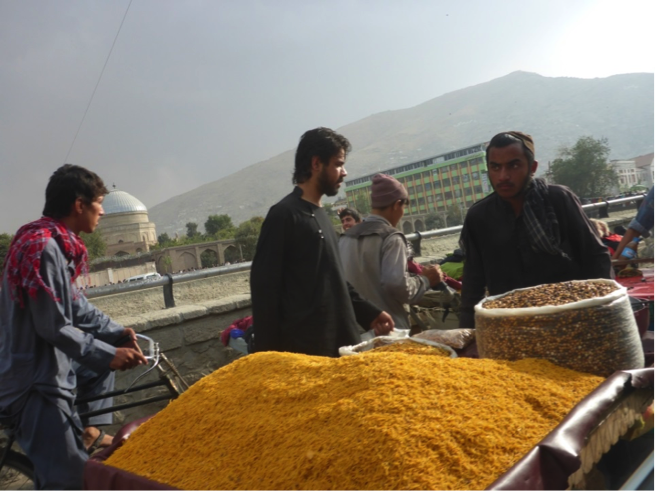 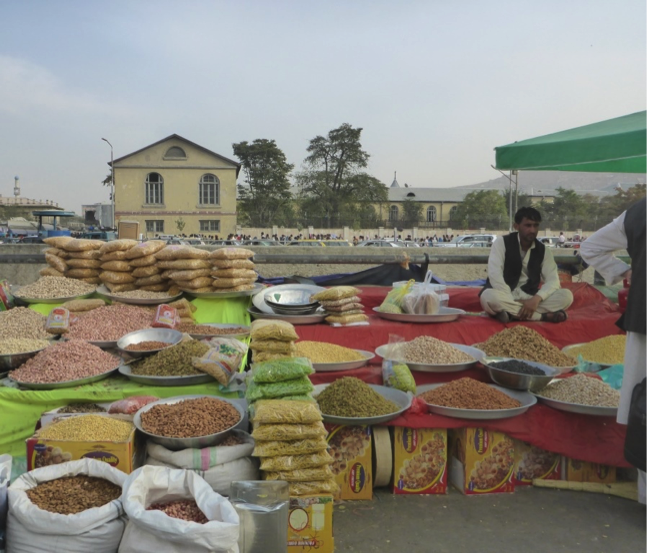 All offices (including ours) are closed, and so we had to fend (forage) for ourselves all week. Luckily we’d been to the supermarket and bought cheese, yoghurt, and so on, and there were a couple of restaurants open so we did manage to get real food once in a while. We decided not to go for a burger, though, because it’s not just the name that counts. Along the same lines, I keep expecting to see a big sign saying that this is the Kabul Equipment Co-op, but we drive past so quickly I’ve not been able to see whether this is the case. We also decided not to buy freshly pulped sugar cane juice, although it looked tasty, but we did go to a nice little place where we sat in the garden, drank lemonade, and ate lamb kebabs and rice. 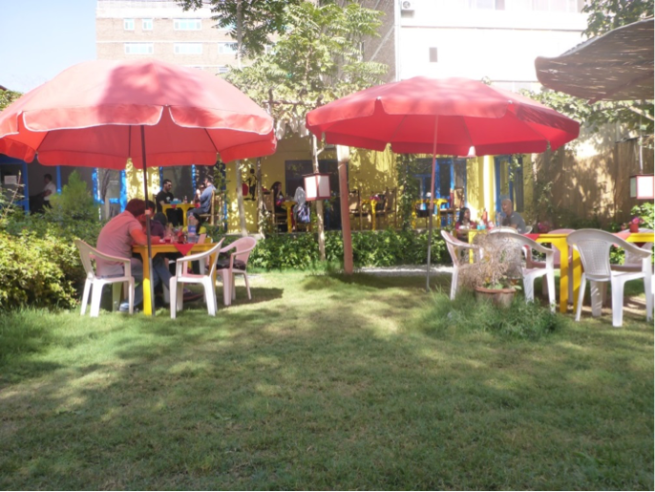 Coming out of the restaurant we found a man selling chai, he had set up his kettle against the wall and was doing a brisk business, taking jugs of tea in to the various shops around. He agreed to let me take his photograph, for which I am grateful. 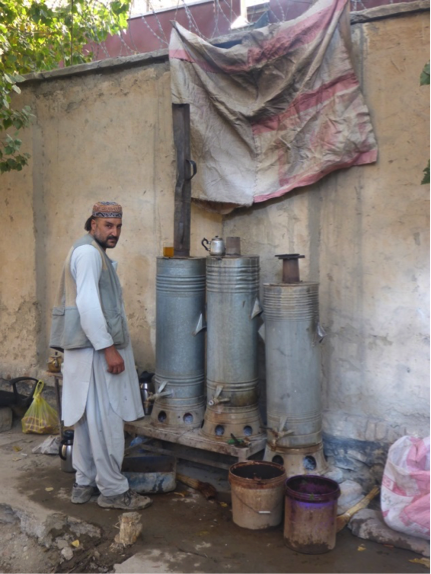 On the way home we found that the book shop made famous by Åsne Seierstad, although now the book seller of Kabul has retired and his sons and nephews run the business. We spent a happy half hour in there, and could easily have spent more. I was delighted to find a copy of The minaret of Djam, by Freya Stark. That’s something on my ‘must see’ list, but that’s a story – and an adventure – for another time.

On the second day of Eid al-Adhu our Afghan staff came to visit. The tradition is that on the first day you visit parents, grandparents, and revered aunts and uncles. The young visit the old, who provide tea and sweets. On the second day you visit family and close friends, so we were very honoured to have them arrive. Luckily we had anticipated this, and had the requisite chai sabz and cookies available. We sat in the garden and chatted for half an hour or so, then they left to continue their rounds – and we went back to work. 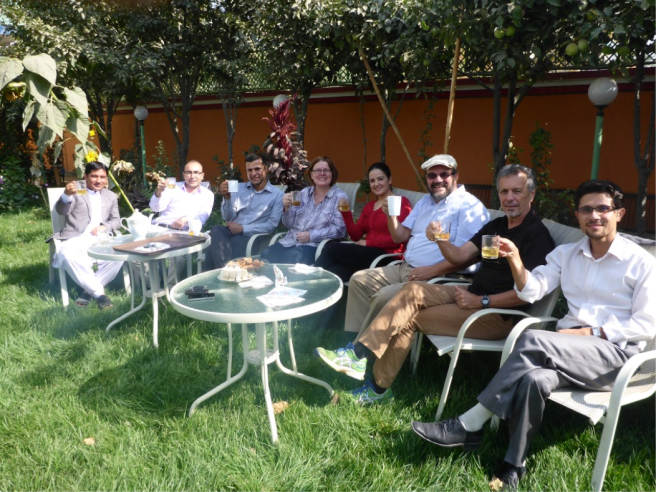 That is, happy Eid!