Last Friday, after writing my second letter in the morning, I went walking down on Chicken Street. This was well-known during the Hippy Trail days of the 1970s, and is still considered the “go-to” place for souvenirs of Kabul.

We walked down the narrow lane, looking in the shops. Sort of. Window shopping doesn’t really exist in Kabul – as soon as you make eye contact with an object in the window, someone dashes out of the store and pulls you inside to have a proper look. As my colleagues and I meandered down the street, accompanied by our driver who was doubling as interpreter for the afternoon, we saw many wondrous things, arranged on counters and hanging from hooks.

There were lapis lazuli pendants and necklaces, the blue stones shimmering like a summer Saskatchewan sky.

There were handbags made from camel leather, soft and supple to the touch.

There were embroidered sheepskin jackets lined with wool, the original Afghan jackets that emerged in London during the height of Carnaby Street.

There were silk scarves, brightly coloured, hand woven on looms in a tiny upstairs room and then sold in the shop below.

There were pakuls, the men’s hat made from woven wool and available in muted tones – black, brown, beige, and grey.

In the street we walked past young boys selling tiny purses, roughly embroidered and studded with coloured glass. A woman in a blue burqa, holding a small child in her arms, pleading for change.

A man with a barrow, selling pine nuts, carefully weighed out on a pair of scales. I bought 100 grams for 120 Afs (about $2.50), thinking how much that would cost me at home.

As I moved from shop to shop, urged in by men in pakul and turban, laughed at by small boys as I constantly untied and retied my shoelaces, I came to realize that I needed a new carpet. Not wanted one, I could resist that urge, but actually needed it.

Our front hall has a wood floor, polished to a bright shine, and so we lay down Zellers rugs to stop socked feet from slipping or muddy paws from tracking. In a corner stands George the General, a three quarter size terracotta warrior I brought home after a trip to Xīan, but that’s another story. The General would appreciate a carpet from the eastern reaches of the Silk Road, I thought.

And so it began. The ritual of the market, the praising of the quality by the seller, the identification of minuscule (and often fictional) flaws by the buyer. The litany of woes – one has a house to keep and children to feed, the other is a poor traveller on a limited budget. The comparison of prices – but over there the same size carpet is $50 cheaper, and the design is similar. Yes it is – I have a photograph, here, look! An unanticipated benefit of digital photography. This one has only traditional colours, that one is a more modern design. This has a repetitive motif, that one shows pictures of tanks and fighter jets.

After an hour, with my colleagues waiting patiently, or crossing the street to avoid my more outlandish posturing and lamentations of poverty, apparently they felt they might ruin the moment by bursting out laughing, I got him down from $350 to $200, and happily walked away. 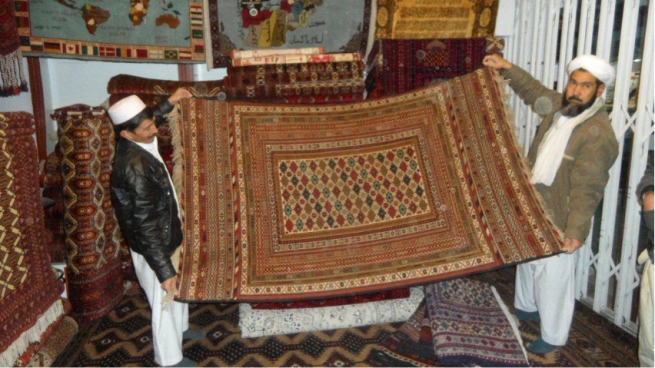 “You know he would have taken $190,” sniffed my driver, but I didn’t care. It was a fun way to spend an hour on a sunny afternoon in Kabul.

Back at the hotel I suddenly realized that, as so often happens in our lives, passion had overtaken reason. My road to Kabul on this trip had taken me through the snows of Alberta to the rain of Ottawa, to the dust of Afghanistan and soon on to the storms of north Wales. I had packed for 4 climates in 3 countries, and had tried to control the amount of stuff I needed. After all, people like Thesiger could go for weeks with only a spare pair of socks and a dinner jacket in case they were invited to an Embassy soiree. So I had only brought one suitcase with me. And it was full. Very full.

What to do? Then I remembered. Alongside one of the roads in the Wazir Akbar Khan district I had seen people selling suitcases. Lots of them, of many sizes, lined up against the fence. They were just down from the sellers of designer jeans and t-shirts, and across the street from the guys who had burned verses from the Holy Koran in calligraphic script on to stretched lamb skins. These were pegged out along the opposite fence, looking for all the world like an eastern version of the back room of Robertson’s Trading in La Ronge at the height of the trapping season.

The next day when I mentioned the suitcases, the driver was dubious. “They’re not very good quality”, he mused.

“Oh, OK then,” he said brightly, and after dropping my colleagues off at the hotel (I couldn’t make them go through that again) we set off for Wazir Akbar Khan.

It was gloomy when we arrived, nearly dark, but bright fluorescent lights hanging from a string of wires gave light. The driver made me stay in the car, otherwise “the price will double as soon as he sees you.” Soon he came back with two possibilities.

One looked good, so I carefully examined the other. We discussed its merits, its challenges (it was bright green for one thing, although I had to agree it would stand out from the ones other people owned), and its cost. “A bit high”, I murmured, and then pointed in disinterested fashion at the other.

“Ha!” I turned away, and opened the car door.

“Forty? That suitcase will die after one visit to the airport.”

“No, it’s strong – see!” He jumped on top and pushed his knee in to the fabric, pulling the sides towards him with great vigour and making a big dent which popped back to normal when he stood up.

I shook my head. He then proceeded to destroy the reputation of the first suitcase, all the time extolling the virtues of the second.

“Thirty five”, I offered, when I thought he’d started to repeat himself.

He shook his head, picked up the suitcases and turned away.

“OK,” I said to the driver, “Let’s go down to the fellow on the corner and see what he’s got.”

We climbed in to the car and were just closing the doors when the salesman turned back.

“OK, thirty five,” he sighed, pretending that he was losing money on the deal.

I only had two twenties, so I had to ask him to give me change.

He looked at me incredulously, no doubt thinking – rightly – that I’d gone shopping fully expecting to spend $40. I smiled at him, and he burst out laughing, and gave me my change.

“You know he would have taken thirty,” sniffed my driver, as we drove away.