After the exertions of my hike I had had enough walking, so we rented a car for the weekend and drove around Rapa Nui at our leisure. Later, on the plane back to the mainland, a fellow in an adjacent seat seemed surprised. He asked me if I had felt comfortable driving there.

“There’s a 60 kilometre an hour speed limit,” I said, “the big thing you have to do is watch for potholes and slow down for tourists, horses and cows.” Just like home, I chose not to add.

“There are only two roads,” I said, “and it’s an island so you can’t really get lost.”

I wondered where he had been for the past few days.

We got a little Suzuki Jimmy, a tin can on wheels with a lawn-mower engine. We used to have one about 40 years ago, but I noticed they are smaller now – the distance from my stomach to the steering wheel was much reduced. I think it’s all these technological advances we keep reading about. The car was sufficient for our needs and cheaper than anything other than a quad bike, which I was banned from even contemplating. We drove around and looked at various moai, some with top knots carved from red lava and some without.

All the moai were carved at the same place, a quarry on the slopes of Rano Raraku, an extinct volcano in the north east of the island. The site is littered with finished moai, over 300 of them, ready for transport but buried where they lay. There are even some half-carved, visible still in the layers of volcanic tuff from which they would have emerged under the guiding hand of a master carver. 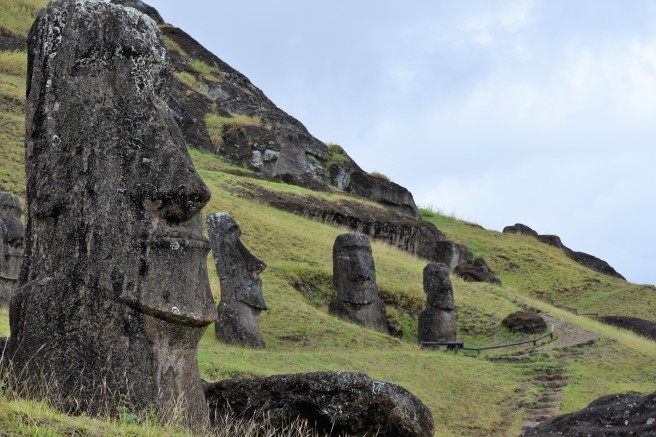 The moai were then moved to their place on top of an ahu in some distant village; nobody is quite sure how they were moved, although various theories have been suggested. One is that they were laid on wooden sleds and then pushed, another that they were rolled on logs. The oral legend is that the moai walked to the ahu, by themselves, which is probably not likely although should not be discounted. Some archaeologists have been able to construct an elaborate system of ropes and pulleys, and “wiggle” a replica moai for about 5 metres. As some are almost 40 feet (12 metres) tall and weigh over 75 tons, the work must have been tremendous. The task was further complicated by the fact that if a moai toppled while in transit, it was no longer deemed worthy, and was left abandoned – in one case mere metres from the ahu. As the carvers were paid for their work, and presumably received payment once the statue left the quarry, the loss of one would no doubt prove a significant ‘hit’ to the resources of the purchaser. Not much wiggle room there. 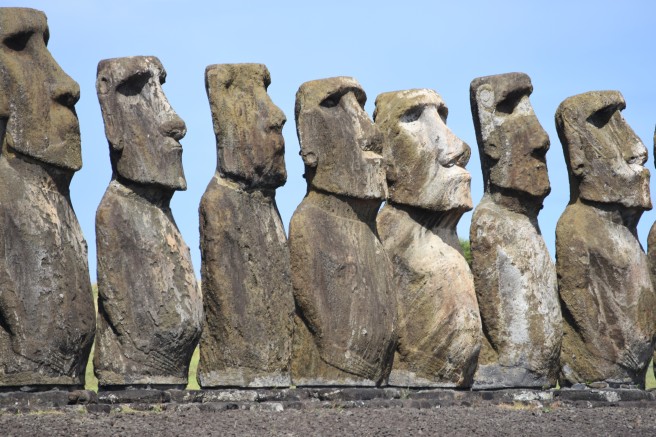 The top knots, or pukao, were carved at a different quarry, Puna Pau, where the lava beds were red as opposed to grey. This quarry was in the centre of the island, and the pukao were rolled from there to the ahu where they were placed on top of the moai. It was only at this point, apparently, that the moai were considered whole, and the eye sockets were carved, bringing the statue to life and able to watch over the village.

In some cases, eyes made from coral were inserted in to the sockets, but it is by no means certain that all moai had such eyes. 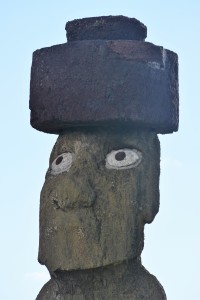 It seems that every Rapanuian household must have five members: mum and dad, a couple of kids, and an archaeologist. Certainly, there are lots of learned tomes which have studied the moai culture. The consensus is that this culture emerged in the 13th century, around 1350, which would be six or seven hundred years since the first settlers had sailed their double-hulled canoes into Anakena Bay. The moai period lasted for about 400 years, by which time it appears that the communities had used up most of the limited natural resources. A time of shortages followed, which may well have been linked to weather disruptions being experienced around the world. The first European explorers arrived, introducing new genes and technologies to the island. Inter-clan warfare broke out, and people started to topple the moai in what were now perceived to be ‘enemy’ villages. On impact these often broke at the weakest point, the neck, with the pukau rolling away from the head.

The people of Rapa Nui decided, it seems, that their old gods weren’t working properly, and so they should have new ones. In the late 1600s, the cult of the Birdman emerged. We went up to Orongo, a village at the top of Rana Kau, another extinct volcano but this one in the south of the island. The village is different architecturally from the earlier boat house shaped dwellings. Here slabs of stone were laid on top of each other, building a long series of separate rooms, much like a row of terrace or town houses. There are 53 houses preserved at Orongo, although some are off limits as erosion has undercut the rock faces on which they stand. Although not inhabited year-round it was from here that the Birdman cult was based. 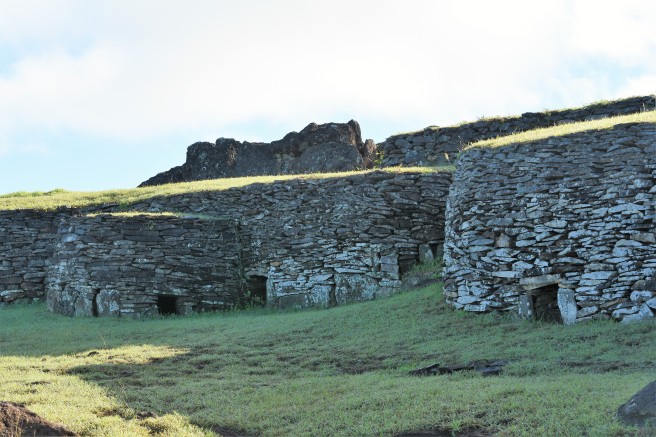 To get prestige, and power, each spring the various chiefs would sponsor a young man from their clan to compete in a race out to some rocky islets about 2 kilometres off-shore. The purpose was to run or scramble some of the way down the 1000-foot cliff from the village, dive the rest, and then swim out to the islet without drowning or getting eaten by sharks. On arrival at Motu Nui, the largest islet, the racers would climb up and wait for the arrival of the first manutara or Sooty Tern (Onychoprion fuscatus). Each would watch a nest and (eventually) steal an egg, put it in a pouch around his head, swim back (no sharks or drowning) and climb back up the cliff with the egg. Without breaking it. As a result of all this the sponsor of the winner got the title of ‘Birdman’, which was a position of power much like being a paramount chief, and which he would hold for the next year. The winning clan got an increased share of the available resources, and the young man got to visit with a young lady who had been selected as a sort of Homecoming Queen, and who was waiting for him in one of the slab stone houses of Orongo. 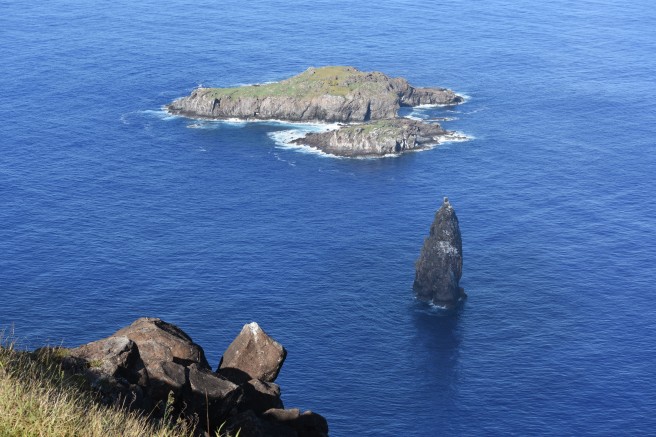 It was a pretty vicious competition, with oral histories indicating that over half of the competitors died from falls, drowning, being eaten by sharks, or being killed by their fellow competitors. The Birdman cult became defunct after the 1860s. One reason was the slave trade, where as many as 1500 islanders were taken to Peru. Although there was widespread condemnation of this action, only 15 people were repatriated, and they brought smallpox with them when they returned home. A census in 1877 found a population of 111 people, down from the estimated 12,000 who inhabited Rapa Nui during the moai period. In 1866 a permanent Catholic mission was established and the Birdman cult was abandoned as Christianity was adopted across the Island and became dominant. Some people say that this, in turn, has now been usurped, and the cult of the empanada (a sort of savory filled pie) is now risen! We had some of those as well.

The crater of Rana Kau contains a lake, one which supports all types of flora found nowhere else on Rapa Nui. The reeds floating in mats on the surface of the lake are apparently the same as those found at Lake Titicaca in Peru, which has led to speculation by Heyerdahl and others about human patterns of migration. Core samples taken from the sediments in the lake include pollen that shows the reeds have been in the lake for over 30,000 years, long before human contact. Unfortunately – albeit appropriately – one is no longer permitted to descend inside the crater and instead has to view the reeds, and the lake, from the rim, which is about a kilometre in circumference.

We were rewarded one evening by a clearing of the clouds, and a dramatic sunset. For the people of the moai it must have been a good way to close the day, knowing that such a robust presence had walked to their village, and was watching over them as they slept.