It’s 1.00 pm on the Wednesday afternoon of Holy Week and the little map on the seat-back screen in front of me tells me we’re at 10,362 metres and travelling at 774 km/hour.

That’s about as much use as the map can be, however – the rest of the screen is blue, with a line coming across from the right that has a small aeroplane icon on the end of it. I’m about three quarters of the way across the huge swath of Pacific Ocean between Chile and Rapa Nui, as Easter Island prefers to call itself. Places across the Pacific are being reclaimed and renamed, from Ayers Rock to Uluru, from Easter Island to Rapa Nui.

Eight months ago, this seemed like a good idea, to go to Easter Island for Easter, as a sort of grande finale to my teaching career. I thought I would have taught my last class, marked all the papers, and have a few weeks break before Convocation, and the next big event on my professional horizon – cleaning out my office.

Being a natural – indeed, champion – procrastinator, the idea of an idyllic few days away was promising. I have to say that so far so good. We’re crossing almost 4000 kms of open
ocean and travelling a bit more slowly than usual due to the head wind. I suppose it would be worse if we were on a boat, although from this height I can, with just a little imagination, see the wakes of Roggeveen and Cook.

Yes, Cousin Jimmy made it here as well!

No doubt the place itself will show up on the map soon. If we miss it then it’s another two thousand kilometers to Pitcairn!

I’m not really sure what to expect from Rapa Nui. It’s quite small, both physically and also from a population perspective, with about 7500 residents. It’s a UNESCO World Heritage site, and apparently none of the buildings are allowed to be higher than a single storey. From my reading it seems that everything has been deforested, a whole island clear cut, but I’m not sure whether that’s still the case.

Then there are the moai, of course, those ancient stone heads, which will hopefully astound me with their magnificence. But like all the things that one has been looking forward to, there’s always the frisson that reality won’t match up to expectation. We’ll see.

It’s hard to get here, the Islanders are trying to maintain their sanity I suppose. If one lives on a desert island, then I guess you want to keep the numbers manageable. Tourists and Chileans alike have to go through an ID and security check before boarding the plane and have to show both that they have reserved accommodation somewhere and have a return flight home – with a maximum stay of 30 days.

The plane itself is not the tied-together-with-string aerial equivalent of a tramp steamer that one might expect, but a rather swish Boeing 787 Dreamliner. Indeed.

We spent a few days in Santiago on the way down, after a quiet overnight flight from Toronto. It’s my first time to Chile, indeed to anywhere in South America, and I am wondering what took me so long.

Santiago itself has over 7 million people, so it’s a bit busier than Charlottetown, but once you’re out of the city then the countryside itself is beautiful. We went up to the Andes, the van crawling along a single track, dirt road with a hill on one side and a 40-metre drop to the valley floor on the other.

Oh, and two lanes of traffic trying to fit themselves into one, with much cursing and backing up and scraping of cars along the hill edge or scattering stones off the other, and every now and then someone jumping out and directing traffic to clear the snarl – at least until their vehicle came through, at which point they jumped back aboard and left the masses to fend for themselves.

I was disappointed in the amount of garbage blowing around on the high hills. It seems people drive up on weekends for picnics and the idea of “leave only footprints, take only memories” hasn’t really worked its way up to the Andes yet. But I did see a condor, the huge bird slowly crossing the valley, impossibly big for something so high and yet moving with purpose and speed.

Apparently, they are becoming a problem lower down in the foothills, where new housing developments are encroaching on previously barren slopes. We were out for dinner with a Chilean teacher whom I know from when she was studying at UPEI, and she was saying how people have had to telephone the city by-law officers in a
panic, “there’s a condor on my deck, eating the bar-b-que meat!” A rich person problem, I suppose.

We saw a splendid example of entrepreneurship in action. As one travels up the dirt road, every here and there one comes across a small house or cabin, surrounded by wire corrals and accompanied by a couple of small stables or sheds. There might be a horse or two in a paddock, and a dog or six wandering through the dust, but most of the animals – sheep, cattle, llamas – are still up on the hillside in their summer grazing areas. 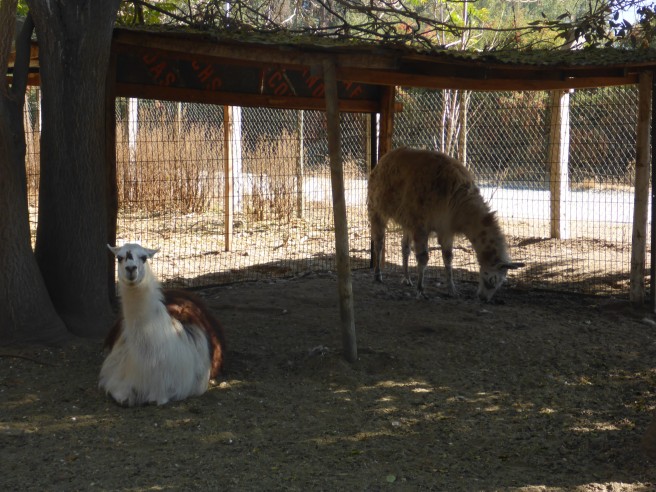 One such encampment was different, as in addition to the house and sheds and corrals there was a large toilet on a plinth, and a sign proclaiming “BANOS”. We pulled in and parked outside a rather basic 2×4 and plywood outhouse where for 500 Chilean pesos (about a dollar) we availed ourselves of the facilities. The fellow was doing a roaring trade, with van loads of tourists pulling in on a regular basis. I asked if there was a ‘day pass’ rate and he said no and charged me again – with a laugh – when we stopped on the way back down.

Chile is such a long thin country – like a chili, one of the tour guides proclaimed – that you can go from high alpine to sandy beach in a day. So, on another day we drove the other way, to the seaside towns of Viña del Mar and Valparaiso. At the former we watched the sea lions lazing on the sand outside the fish market, replete after the morning scraps had been thrown into the sea. The surf came rolling in and was
ignored, only a lazy wave of a fin to try and swat the breaker away. Most of the fish had been sold, although there were still crabs and sea urchins and mackerel for sale, and the fishermen on the wharf were mending nets under the watchful eyes of gulls and pelicans.

At Valparaiso the houses in the older parts of town are painted in bright primary colours, and we heard that each house is a different colour because the paint is that which was left-over from when they painted their boat, or because that way a drunken fisherman can figure out which house is his when they are all otherwise alike. Those are the same stories I have heard at Cheticamp on Cape Breton, at Staithes in Yorkshire, at St. John’s, Newfoundland – perhaps fishermen are the same the world over.

We went up and down the hills of Valparaiso on the funicular cars, refurbished remnants from a colonial past, and then walked around the streets admiring the incredible art murals. These adorn pretty much every building, although some streets are more decorated than others. It’s not fair to call it graffiti as that implies illegality – this is street art. The artists ask permission, and the regular graffiti folk seem to respect the work, as they are signed instead of being covered with tags.

Some pieces were simply decorative, whimsical views of landscapes, people, animals, birds. Others were more abstract, incorporating a feature of the wall – a window, a drain pipe, a crack in the plaster – and building on that element for the rest of the image. And some were political, powerful statements or rants about various aspects of history or social inequality. On one particular wall was an artist’s view of the history of Chile, a sort of painted Bayeux Tapestry, telling the story from the indigenous people through the Spanish conquest to the modern day. It was clear and graphic, painted only in black and white with gory scenes as well as humour. At one place a pike spear was being wielded against an unarmed woman, at another a hand was grasping a fast food bag where the M was emblazoned on the local dialect word for faeces. At last we took the funicular down the hill again and went for lunch.

And now I see a small green dot on the map, the dotted line pushing the aeroplane icon ever closer, now 398 kilometres to go until we make landfall on Rapa Nui.

Depending on which map you study, the names change and blur one into the other. Ilha de Páscoa, Isla de Pascua – Easter Island on the cusp of Easter. I wonder whether we will find a restaurant serving the Pascal Lamb. Or perhaps here it’s a Pascal llama?